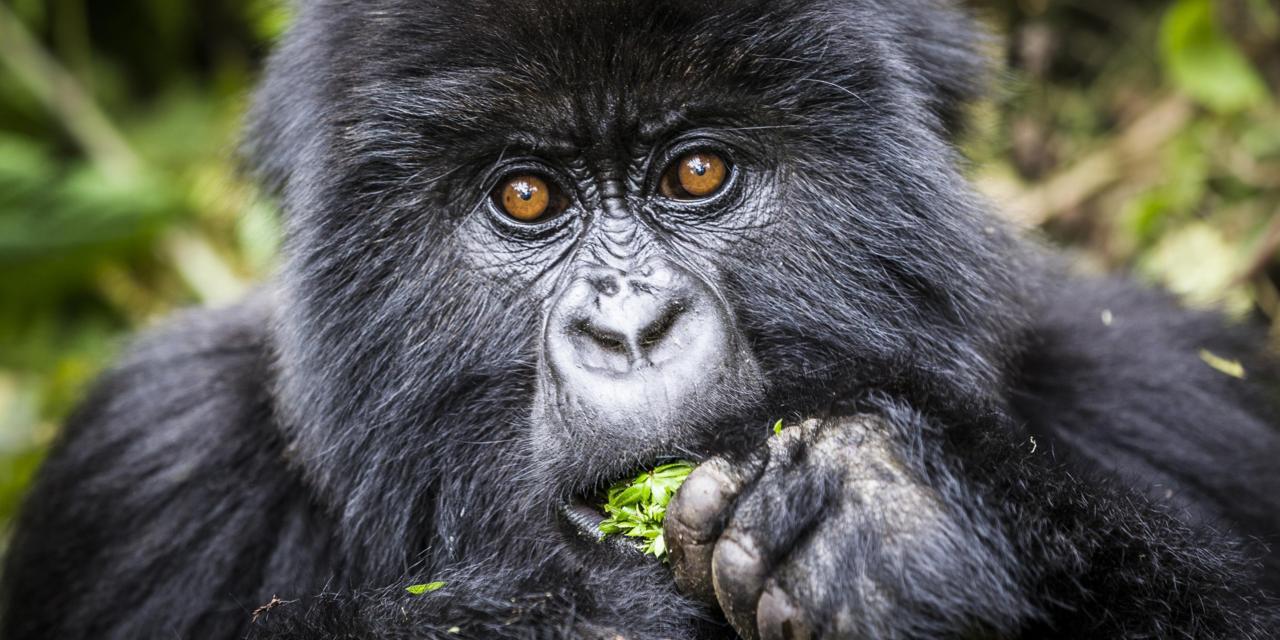 Only found in Africa, Gorillas are a unique species you must see. These apes inhabit the Western, Eastern and Central forests of the Continent.

There are ground dwelling, herbivorous in nature and feed most on young Bamboo shoots, stem, foliage, tree leaves and some fruits.

Below are the most dominant Safari parks in Africa where the shy endangered mountain gorillas and Lowland gorillas are found.

This is one of the best destinations in Africa popularly known for the shy endangered mountain gorillas; it is located in the Western part of Uganda in Kabale.

It takes about 8-9 hours to drive from Kampala to Bwindi Impenetrable National Park. This park is ideal not only for Gorilla tours, but also for bird watching and incredible cultural encounters.

This protected area is home to the biggest percentage of Uganda’s Gorilla population. Over eighteen families are fully habituated and ready for tracking.

The expeditions take place in the four sectors that dot various regions of the park. The list encompasses Ruhija, Rushaga, Buhoma and Nkuringo sector. Each venue has more than two gorilla groups.

Activities done in Bwindi impenetrable National Park are gorilla trekking tours, habituation excursions, birding and visit the Batwa people. Out of the nineteen gorilla families, only one is used for habituation experience.

This is another alternative for Gorilla tours in Uganda if not Bwindi. It is located in the Western part near DR Congo’s Virunga National Park.

It differs itself unique with tropical rain and Bamboo forests which provide lush habitats to Golden Monkeys. Mgahinga has only one habituated gorilla group for trekking named “Nyakagezi”.

This Park can only be accessed via foot and it’s also known to be good for birders because of its different bird species recorded sightable while on Forest walks, while in Mgahinga National Park the mostly done activity is gorilla trekking and Batwa Cultural experience.

This is the oldest national park in Africa formerly named Albert National Park; it is strategically located in the Eastern part of Democratic Republic of Congo bordering Volcanoes National Park of Rwanda, it is also popularly known for the shy endangered mountain gorillas with over six habituated gorilla families for trekking.

Virunga National Park is characterized with tropical rain forests where these shy endangered Mountain gorillas are residents and some parts covered with bamboo forests, this park is also rated to be among the best bird watching site in Africa depending on different bird species recorded sightable in this park.

How to reach Virunga? This park is located in Democratic Republic of Congo and this country is have a poor air transport system therefore its better you land in Rwanda at Kigali airport since these countries are bordering each other and transfer up to Goma border after clearing with the customs but you must apply for a Congo entry visa in advance such that it’s processed in time of about one week.

After crossing borders, you will be transferred from border up to Virunga National Park by the Virunga Safari Jeeps but all this is done after booking with them through use of their local tour operator “Eco Tours Rwanda”.

To Trek Mountain Gorillas in Democratic Republic of Congo you must buy a permit which costs $400 USD per person.

This is Rwanda’s most popular destination to visit in Rwanda and is popularly known for the shy endangered Mountain Gorillas.

This Park is located in the North western part of Uganda bordering Virunga National Park of Democratic Republic of Congo.

This park is inclusive of the Virunga Massif with over twelve habituated gorilla families for trekking and it’s characterized with both tropical rain forest and Bamboo forests where Golden Monkeys are residents.

Traveling to Rwanda you will arrive in at Kigali airport and transferring from Kigali airport to Volcanoes National Park it is about 2-3 hours of time.

Although this park is mostly known for the shy endangered Mountain Gorillas plus the Golden Monkeys it’s also rated to be among the top bird watching sites in Rwanda with different bird species recorded sightable while in the Jungle.

This Park popularly found in Democratic Republic of Congo is known for the Eastern Lowland Gorillas which are found in the tropical rain forest of this park, Lowland Gorillas are big and huge when compared to Mountain Gorillas.

While in Kahuzi Biega National Park the only activity done is Lowland Gorilla trekking plus visiting the Lwiro Chimpanzee Sanctuary.