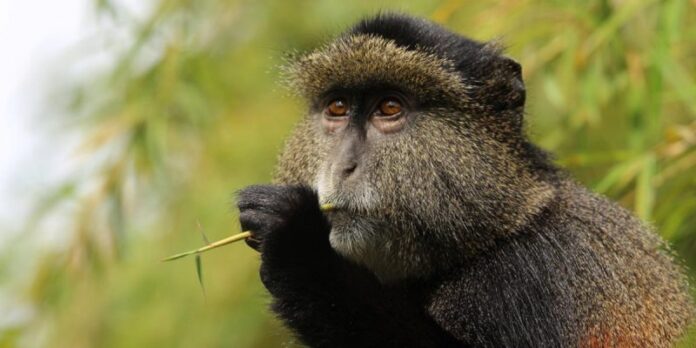 Golden monkey trekking in Rwanda takes place in Volcanoes National Park, a protected area in the northwestern part of the country.

The entire experience of tracking these fascinating creatures is so epic and memorable; encountering with a rare and beautiful species of the old world monkey family.

These primates are quite appealing to watch and offer fantastic photography.

Even though this activity is overshadowed by the famous mountain gorilla trekking safari experience, it’s also a must engage-in pursuit. The required permit is of course affordable and costs US$ 100.

You can do it after seeing the endangered mountain gorillas or take it as your main pursuit in the park, especially if you can’t afford the Rwanda gorilla permit that’s a bit pricey at a fee of $ 1,500.

Classified as endangered species, these creatures reside in the Virunga Mountain range which occupies part of Democratic Republic of Congo, Rwanda and Uganda.

Rwanda and Uganda are the only two countries where visitors have the chance to trek these beautiful monkeys.

In Uganda, they reside in the Mgahinga Gorilla National Park, of which you can also trek mountain gorillas there as well.

The golden monkeys live in the bamboo forests and vegetation at the base of the Virunga Mountains. They mostly feed on bamboo shoot, bamboo branchlets and young bamboo leaves.

It is the mostly visited in the Park. Golden Monkey trekking is only eligible to individuals aged at least 12 years.

There is only one session arranged in a day and takes place in the morning like most of the other pursuits in the Park.

Tourists always have to report to the Park Headquarters, at Kinigi, very early in the morning where they will meet the park ranger guides for briefings about the activity.

After the briefings at Kinigi, you will then drive to the start of trek which is like a 20 minutes’ drive from the Park headquarters.

The monkeys will easily be found as they live at the bottom of the Virunga Volcanoes in the bamboo forest, and by following clues of fresh leftovers from eaten bamboo shoot and leaves the trackers are able to locate them in less than an hour.

Once trekked and found, trekkers will be allowed to spend utmost one hour watching these amazingly beautiful golden monkeys up-close.

You will watch these fascinating monkeys as they skillfully pick bamboo shoots and young bamboo leaves while making huge leaps from tree to tree which is enabled by their extra-long tails that provide great balance.

However, the long tails usually can get trapped by the bamboo and cut off as you will see some monkeys with short tails.

The monkeys spend a lot of time at the top of the bamboo, but also do climb along the tree to eye level and even move on ground. They are some of the least shy monkeys as you can get so close to within a meter.

Sometimes the monkeys will venture out of the park into the open potato fields to eat the Irish potatoes left behind after the harvest.

The monkeys’ act of digging and cleaning the potato before eating is amazing to watch and will provide for a perfect snap!

Gorilla Tours in Uganda and Rwanda