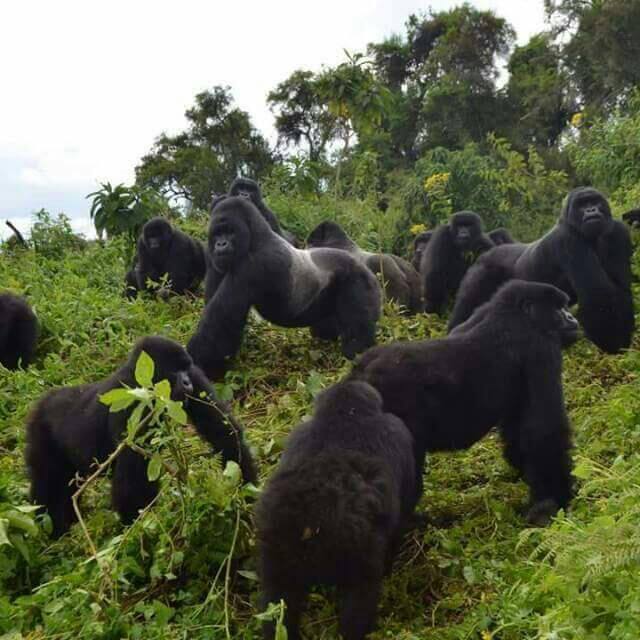 Gorillas are one of the reasons for a trip to Uganda and Rwanda. These two notable travel destinations hide in the Eastern part of Africa.

This group is always led by the old dominant male silver back responsible for looking after its group members through providing security, looking for food and constructing of temporary small grass thatched huts for shelter.

When compared with chimpanzees these apes tend to be humble than Chimps which feed both on ground and up in the tree branches which makes Chimpanzees to be more tricky during the tracking session you have to be more friendly such that you can capture their attention through feeding them with some eatables like Biscuits, Sweet Bananas, oranges, mangoes and more which is not the case to Gorillas.

Since these apes are a special attraction in Africa and rarely seen, to visit them in the gazetted destination permanently located in the Eastern part of the African Continent named to be Uganda, Rwanda and Democratic Republic of Congo you must buy a permit “gorilla trekking permit” which issues you permission to participate in this gorilla trekking safari activity, this gorilla trekking activity involves starting a group walk of about eight people plus the park ranger following the established routes or trails leading you into the jungle in search of these shy endangered mountain and lowland Gorillas very excited to see them feeding, playing with young ones, laughing and taking photos of them for memories.

Before heading into the Jungle you are first briefed about the dos and don’ts while in the presence of these apes by the park officials and the trackers are the first to go as for them are well informed of where these apes spent their last night which makes it easier for them to locate their presence, after they will communicate with the ranger guide who is leading the group via radio calls directing them of which route to take.

Both Uganda and Rwanda host only shy endangered Mountain gorillas with Uganda ranked to be hosting most part of the World’s gorilla population and below are the premium destinations where you can go for gorillas.

This is Uganda’s top major gorilla hosting destination ranked to be hosting most part of Uganda’s gorilla population in its four sectors named Ruhija, Rushaga, Buhoma and Nkuringo sector with over thirteen gorilla families for gorilla trekking safaris and research, this park is located in the South western part of Uganda characterized with strong and thick impenetrable forest where these shy endangered apes live.

This is located in the North western part of Rwanda in Ruhengeri Province inclusive of the Virunga Massif, this is a popular destination which has put Rwanda on board as far as tourism and it’s commonly known for the shy endangered Mountain Gorillas.

This destination is characterized with both tropical rain forest and bamboo forest where Golden Monkeys are residents; it’s about 2-3 hours’ drive from Kigali to Volcanoes National Park.

Although it’s mostly known for the shy endangered Mountain Gorillas it is also a good haven for bird watching with different bird species sighted crossing during the trekking journey.

This is Uganda’s second Gorilla hosting destination if not Bwindi Impenetrable Forest National Park, it has the least Gorilla population with only one Gorilla family for trekking and it is also located in the Western wing of Uganda bordering Virunga National Park of Democratic Republic of Congo and Volcanoes National Park of Rwanda inclusive of the Virunga Massif, its characterized with tropical rain forest and bamboo forest where Golden Monkeys are residents.

For a discoverable gorilla trekking safari in Uganda and Rwanda do not miss out all our ultimate gorilla hosting destinations listed above.